The SME bond market in the first half of 2022: Volume significantly below previous year, as expected; energy sector ahead for the first time; number of green bonds on the rise

Cologne, 25 July 2022 - The current tense situation on the capital market - caused by the ongoing Corona pandemic as well as the war in Ukraine and the associated price increases and supply chain disruptions - is clearly noticeable on the German market for SME bonds. Compared with the first half of 2021 (18 issues), the number of issues was halved to 9 bonds from 9 issuers. The volume placed decreased by 66% to EUR 247.6 million (H1 2021: EUR 727.7 million). Compared to the same period of the previous year, this results in a significantly lower placement rate of 65% (H1 2021: 98%) when measured against the target volume of bond issues totaling EUR 384.1 million. Thus, the SME bond market showed a similarly low level as the IPO market in Germany (3 issues, volume of EUR 331 million). The coupon decreased on average across all transactions by 9 basis points to 5.12% p.a. These are the results of a review of the German SME bond market in the first six months of 2022 conducted by investor relations consultancy IR.on AG.

The energy sector was clearly dominant for the first time in the period under review (four companies, 44% of issuers). Second place went to the real estate sector (two issuers, 22%), which was displaced from first place in the ranking for the first time since 2017. There was one issuer each from the chemicals, financial services and travel & leisure sectors.

With five fully placed issues (56%), the SME bond market recorded a largely stable success rate compared with the prior-year period (50%). In the first half of 2022, there were significantly more follow-up issues (7 bonds) than initial issues (2 bonds). Compared with the prior-year period, which saw 14 issues supported by banks (78%), own issues dominated the market in the first half of 2022 (6 issues, 67%).

Frederic Hilke, Senior Consultant and Head of IR Consulting at IR.on AG: "In parallel to the development in IPOs, issuing activity in the SME bond market also decreased significantly in the first half of 2022. Nevertheless, 9 issuers took the plunge and achieved a respectable result with a volume of EUR 247.6 million and 5 full placements. This speaks for the fact that the SME bond market remains as a possible financing alternative even in times of crisis."

In terms of issue volume, the majority of transactions were in the range of up to EUR 50 million (8 bonds, 89%). Only one issue had a higher volume of between EUR 50 million and EUR 100 million.

The maturities of SME bonds issued in the first six months of 2022 varied between one and six years, with 5-year maturities remaining the most common (seven bonds, 78%). Overall, the impact of recessionary concerns and macroeconomic uncertainties was felt in the market in the first half of the year, which was also reflected in the restructuring (2 issuers, EUR 228 million) and bond defaults (2 issuers, EUR 140 million) to be recorded.

Forecast at the beginning of the year too optimistic, number of green bonds on the rise

At the beginning of the year, IR.on AG asked nine issuing houses active in the SME segment about their forecast for the current year 2022, expecting an average of 25 issues. Looking at the transactions carried out so far, it is to be expected that the forecasts of the issuing houses formulated six months ago, although understandable, are likely to be too optimistic. This is mainly due to the escalation of the Russia-Ukraine conflict, which was not yet foreseeable at the time of the survey.

So far, the issuing banks have been correct in their expectation that green bonds will account for a significant share of total issues (4 green bonds, 44%). 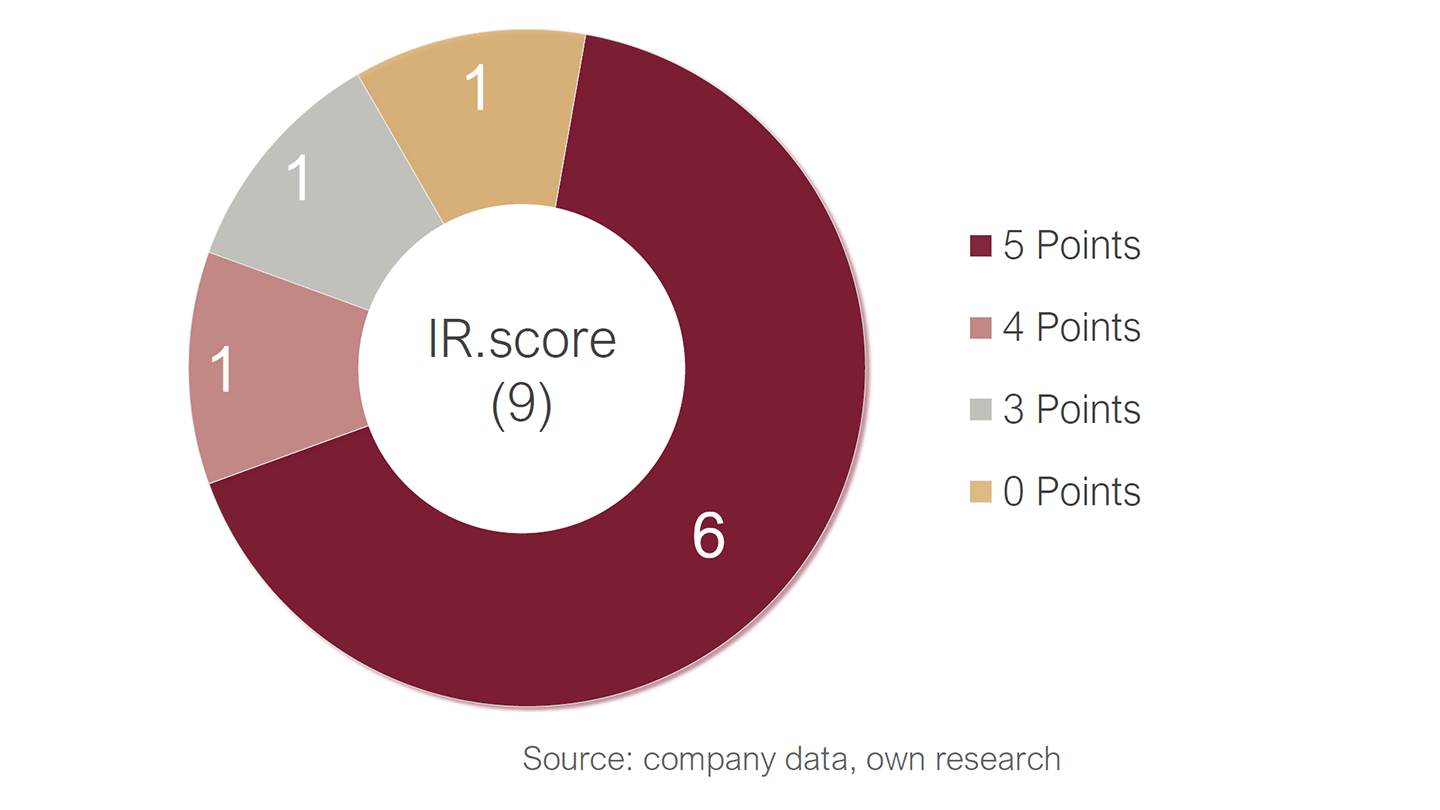 Frederic Hilke: "In the first half of 2022, our examination of the IR websites of the 9 issuers with regard to basic IR information once again confirmed that investor communication - measured by our transparency index "IR.score" (scale of 0 to 5 points) - by listed companies and by subsequent issuers generally meets the minimum requirements. This year, as many as 6 issuers were able to achieve the full score. In contrast, with an average of 1.5 points, first-time issuers often show significant deficits in IR standards."

A summary of the survey is available on the IR.on AG website at https://ir-on.com/en/sme-bonds/.

IR.on AG is an independent consulting firm for investor relations and financial communications. The agency assists companies of all sizes in the development of investor relations strategies, day-to-day IR activities, as an interim IR manager, in capital market transactions and special situations such as crises or restructuring exercises, as well as press relations with the financial and business media.

Headquartered in Cologne and Frankfurt am Main, the owner-managed company was established in 2000. The consultants at IR.on AG combine experience from more than 400 communication projects, 300 annual and quarterly reports and more than100 capital market transactions including 37 SME bond issues.